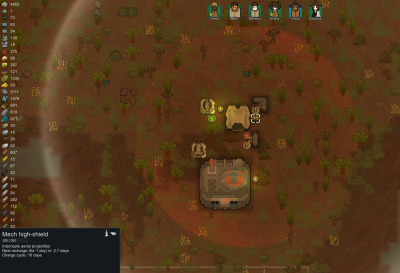 Mech Clusters are best dealt with from extreme range, to avoid placing your colonists in unnecessary harm.

If a mech cluster is well beyond your colony's abilities, you may be able to wall it in entirely while you prepare better armament.

For a Mech Cluster without any proximity activators, 1 explosive IED can take out any turret or small building. 1 EMP IED has a bigger area of effect than a EMP mortar shell. IEDs can be daisy chained to cover a greater area. The IED can be set off with a targeted attack such as a sniper rifle, a mortar volley, or by waiting for an activation timer to count to 0.

For Mech Cluster without a Mortar Shield, mortars are obviously the best way to deal with them, especially as the mechanoids linger in a small, confined area. Prolonged shelling can easily destroy mech clusters and weaken the mobile mechanoids substantially before triggering them to attack your colony (where you can take advantage of your base defenses).

For Mech Clusters with Mortar Shields, you can either try to destroy the shields first with snipers, or simply overpower the shield. Each mortar shield is temporarily deactivated for a few seconds when they block a mortar shell. As such, a battery of 4-8 mortars timed to all fire at once can easily penetrate the shield with most of its shells. Mixing a few EMP shells in can also help disable the Mortar Shield, allowing successive salvos to ignore and hopefully destroy the shield before it can come back online.

Another easy way to destroy a Mech Cluster is to save your Orbital bombardment targeter or Orbital power beam targeter for them. These are quite rare as they are found only via quest rewards and ancient dangers. However, the damage they rain down can easily destroy even a double or triple strength mech cluster, leaving only Centipedes as survivors to assault your base.

The Sniper rifle, Triple rocket launcher, and Doomsday rocket launcher are all long range weapons. The two rocket launchers also do extra damage vs buildings. Using these three weapons with a coordinated first salvo from prepared forward positions, you can inflict severe damage upon Mech Clusters as soon as they wake up. Opening volleys should focus on taking out any defending long-range mechanoids (Lancers/Pikemen) and the Auto-Inferno Turret.

While the Mini-Slugger Turret and Auto Charge Blaster Turret both have high range, the former has weak shots and the latter is wildly inaccurate at range, which means your colonists incur minimum risk from them by attacking from long range, behind cover, while wearing appropriate armor. You can also use a smoke launcher to further protect your colonists as they assault turrets.

EMP grenades can disable both mechanoids and mech cluster buildings. Meanwhile Fragmentation grenades inflict high damage vs buildings and can destroy any mech cluster turret with one hit. Thus a grenadier team, taking advantage of cover from steel walls that often come down with mech clusters, can inflict significant damage if the mobile mechanoids can be lured away and defeated first.

Alternatively, a colonist with the Skip and Invisibility Psycasts can move into a Mech Cluster, use grenades to quickly destroy priority targets, then use Skip to withdraw as soon as the Invisibility wears off. 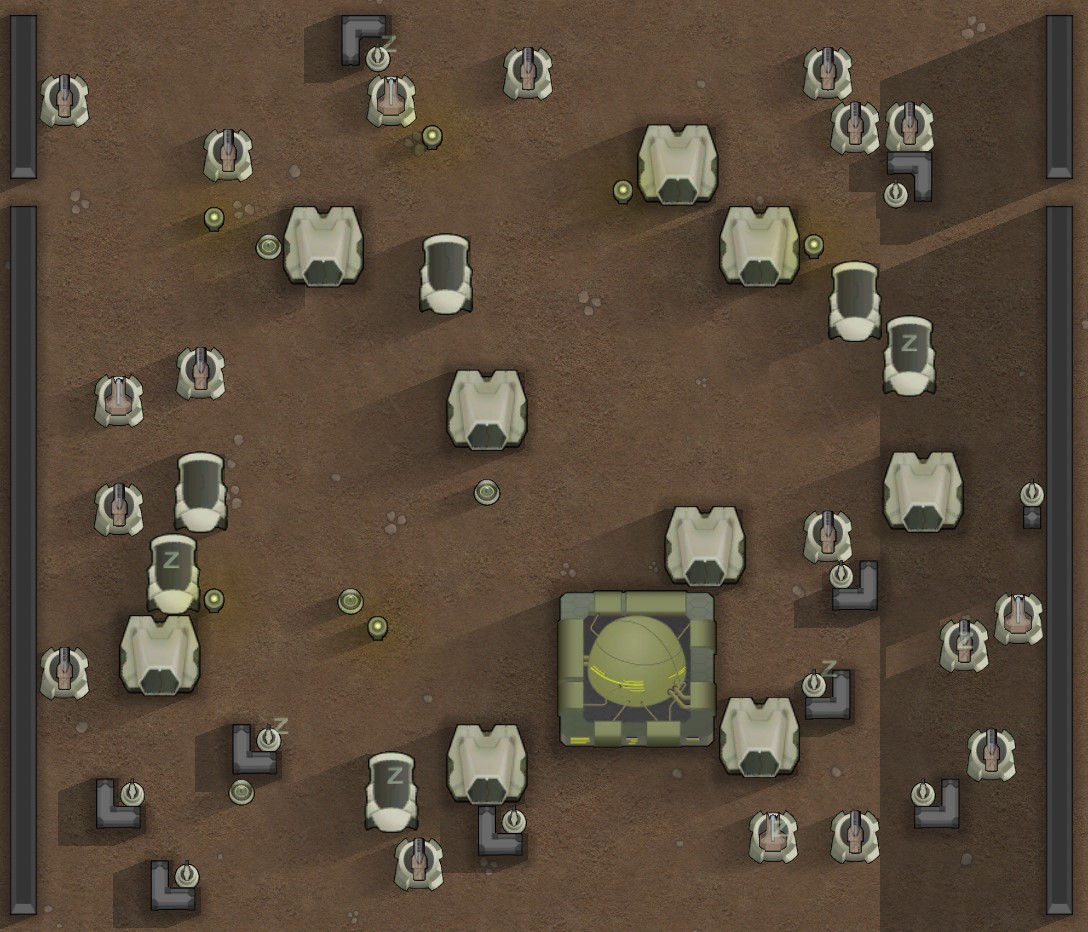 A mech cluster from Total Timewaster's video. You can see that the mechanoids are asleep.

While you may benefit from melee blocking as you face mechanoids, you should not destroy effectors with melee weapons. They are liable to explode, harming the troops who are attacking them.