Difference between revisions of "Lancer"

"A human-sized combat mechanoid with huge optical sensors on its face for aiming weapons at long range. While effective at distance, it is weaker in melee combat. Veterans of mechanoid wars know that often, the safest thing to do against a lancer is to charge."

Lancers are a type of fast-moving mechanoid with strong long-range firepower that deals 30 damage per hit. They can be found sealed in ancient ruins in all biomes, either spawned inside mountains or outside on the landscape. They may also raid the player's base through a random raid-type event and can also be found in most poison ships and psychic ships.

Lancers are often supported by centipedes and scythers, though they outrun centipedes by a huge margin, and will not stop to let them catch up.

Like other mechanoids, lancers are sentient machine-like creatures which do not need to eat, cannot be tamed or trained, and are always hostile to the colony. Lancers have a moderate resistance to sharp damage and a small resistance to blunt damage but somewhat low health, making them trivial to disable at range with sufficient firepower. Lancers are vulnerable to spike traps, with only a few hits required to kill them.

Lancers will quickly charge until they are at range, in which they will stay at maximum range to fire. They will not move around to seek cover, or avoid incoming fighters.

Dead lancers may be disassembled at the machining table for 20 steel, 5 plasteel and 1 component, though these values are affected by mechanoid disassembly efficiency.

Lancers play a supportive role, providing firepower at range to pick off lone colonists while centipedes mow down groups and scythers charge your gunners.

As the description says, charging lancers can be a viable way to take them down, once you have taken care of the initial scyther charge.

The below graph assumes an uninjured lancer using a Normal charge lance. Values may differ as scythers will spawn with charge lances of differing quality, and all values are from Alpha 17. 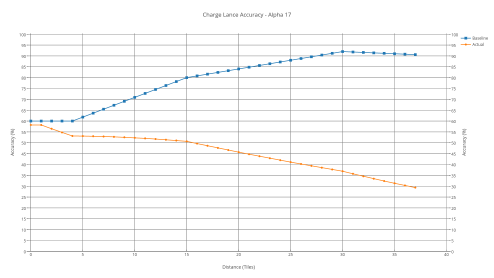 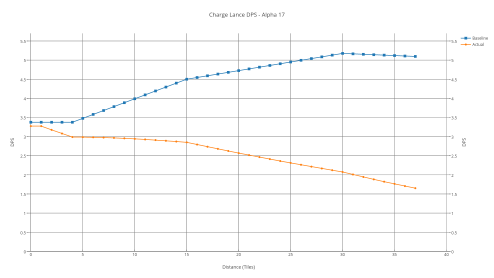