Difference between revisions of "Frag grenades"

Frag grenades have a very short range, a moderate aiming time, and a delay before exploding in a 3x3 area. Very dangerous to use, hard to hit with against moving targets, very expensive, and prone to extensive collateral damage, they aren't the best choice all around for colony defense; at least, not in the early stages of the game. When the raiders and packs of wild animals start getting really thick, though -- and it will happen -- these nifty handheld explosives may be just the saving grace you need to even the odds.

When a character throws a grenade, it will generally land within 1 to 2 tiles of the point the colonist was aiming at, and explode about 1 second after that. Any item or creature within a 3x3 box centered on the explosion will suffer 40 damage, while structures and terrain features will suffer 160 damage -- a rather hefty amount, especially if multiple targets are caught in the blast radius. Since this is an explosion, rather than a bullet, whoever is throwing the grenade can't actually 'miss' their target; even if it lands 1 tile away, it can still deal plenty of damage. This makes raiders armed with frag grenades (a disturbingly common sight in the mid- to late-game) a massive threat to auto-turrets and soldiers in cover, quickly destroying the former while flushing out or outright killing the latter.

Due to their quick-throwing nature, 3x3 blast radius, and their high damage, frag grenades could be the saving grace against outlanders and tribes (and indeed pirates and mechanoids) when on Intense or Extreme difficulty, as the former two raids get much larger (especially tribes) as colony wealth grows. If a colonist has a damaged (or missing) eye, it's more than ideal to equip then with frag grenades, as they they're not affected by shooter accuracy.

A grenade blast instantly extinguishes any fire in it's blast radius. If you're having trouble with a fire, equip a colonist with frag grenades, then order him to throw the grenades at the fire. One grenade each can put out a 3x3 area. However, the resulting collateral damage means it's safer to use firefoam poppers.

Beware of using grenades near important buildings because they can do 40 damage on each square, which means it has a potential of delivering (40×9) 360 damage.

Grenades can also be used to clear a dumping zone for free by having a soldier throw the grenades at the dumping zone. Any items or debris within will be quickly destroyed. Be sure that any items you actually want to keep are not in the blast radius, though! 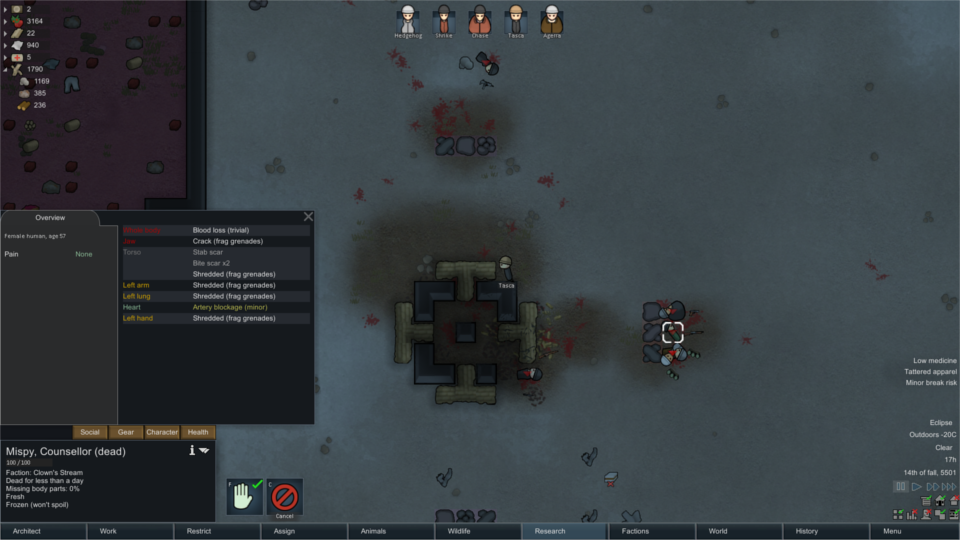