The battery is an electric device that can even out the power supply on an electric grid. It will provide enough power to compensate for any deficit, while charge remains. If there is surplus power, the battery will recharge, but only at 50% efficiency (half the energy is lost). The charge capacity is 600 Watt-days. Batteries self-discharge at a rate of 5 W, even while disconnected, and need to be operated under a roof to keep them dry (rain or snowfall will quickly cause an explosion).

With regards to power production, they behave like the other electric buildings in the game. All power consumers can connect to batteries in the same way as to other power sources: within a 5-tile radius, a device can directly connect to a battery (or array of batteries), without power conduits in between.

Installed batteries need to be kept dry. If outdoors, a roof has to be built over the tiles occupied by the battery. If a battery becomes wet (either due to rain or snowfall), there is a very high chance of a short circuit, causing an explosion and fire (probably spreading to adjacent batteries and connected devices). At least the rain will usually extinguish the fire...

Consumers can connect to batteries directly, up to a distance of 5 tiles away, by using the reconnect action on the consumer until it is connected to the battery.

The maximum amount of energy provided per battery is 600 Wd (watt-days) for a fully charged battery. Eg. if exactly 595 W were drawn, a single battery would last exactly 1 in-game day (taking into account the 5 W of self-discharge). If only 295 W are drawn, it lasts for 2 days, etc. Since maximum power draw is unlimited it is – theoretically – possible to empty a full battery in 1 tick of game time (instantly).

Batteries charge automatically while connected to a power grid with excess power. Selecting the battery will show the current charge status in the information window.

The power used for charging is unlimited, ie. charging batteries will always draw all power that is not used by other consumers, so they never cause a power deficiency on the grid. All batteries on a grid will share charging power fairly.

Only half the power used for charging is stored as energy, ie. the charge efficiency is 50%. In other words, to fully charge an empty battery, 1200 Wd of energy must be provided (in addition to a constant 5 W to cover the self-discharge), but only 600 Wd will get stored.

In practice, the self-discharge can usually be ignored.

Note that it is not the batteries that explode, but a random area around the affected power-conduit. This could be right next to a battery, or a long distance away from it. 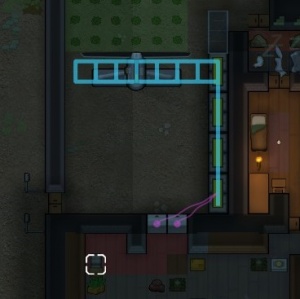 It is also possible to completely avoid building any power conduits at all. This is only feasible for small, self-contained installations. The batteries themselves, as well as other power generating buildings, have built-in power conduits, but these are immune to short circuits. Because consumers can directly connect to batteries (and other power generators) over a 5-tile distance, you can construct conduit-free power grids with some careful planning.

If the above measures are impractical, firefoam poppers should be installed where an explosion would cause a lot of damage, such as inside a hydroponics facility or a storage area.

Battery performance is not affected by temperature. Somewhat contrary to the in-game description, the battery is not more susceptible to heat than other, comparable flammable structures. Even the most extreme heat waves will not make a battery explode or catch fire. It is therefore not necessary to keep batteries climatized.

Batteries can also be used to make fueled generators more economical. These generators provide constant power, but they also burn their fuel at a constant rate – no matter how much power is actually used. If you connect some batteries, you can at least catch half of the otherwise wasted energy, and then disable the generator until the batteries run dry. This will save 100% of the fuel for the time the generator is offline. This is especially helpful in the early game, where you might not even have enough power draw to fully load a single generator, and fuel will be usually scarce as well.