Difference between revisions of "Basics"

This article aims to teach you the basics of most of RimWorld's game systems. It should answer the question "ok, I landed, so what now?"

To illustrate the guide, I will show the progress from the first hour of a colony. The events will shown be roughly in order they happened, but quite a few things were actually happening in parallel.

Temperate Large Hills as a good place to start

Before you can start a game, you need to create a world and select a storyteller. I recommend Cassandra Classic on Basebuilder difficulty for the first time playing.

Choosing a landing site. The best landing sites for your first game are temperate regions with large hills or mountains, with everything else mattering little or best left at default.

Prioritize "Incapable of None"

Finding the right team. The big thing about team selection is which work your colonists can do. Since you start only with three people, you cannot afford to specialize in the beginning. Consequently, you best take people that can do every work, otherwise you might have only one or two people that can do a crucial task.

The second most important matter is age, with very old people often having health problems that interfere with most physical tasks. Conversely, though, they tend to have much higher skills than young people. I'd personally say that as long as you don't have only old people, you don't need to pay too much attention to that.

As for skills and traits, I find that they do not matter that much. If you like to micromanage your start and have a bit of an easier time, look for high growing, shooting, mining and cooking, as well as traits that give bonus to mood or reduce the mental break threshold, and avoid traits that do the opposite. But as I said, that is not necessary, and I'll show how to manage mood and prevent mental breaks below.

Wait until all three colonists have landed, then press space to pause the game to have a look around. You can move the screen with the cursor keys as well as wasd and zoom with the mousewheel. 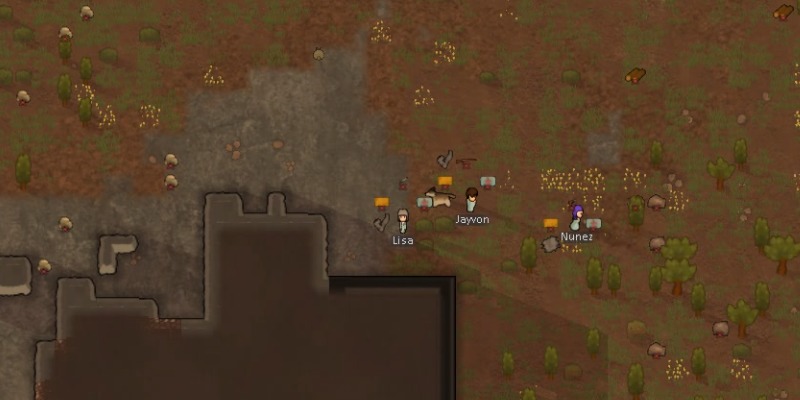 What's going on here? Well, there's our three colonists, who are surrounded by various things.

Let's first talk about the terrain: our colonists are next to a couple of hills. A black brick building has been built onto the hill closest to them. We cannot see the inside of the hills or building. The east and north are fertile soil with some flowers, grass, bushes and trees. There are a couple of patches of infertile rock ground in the east, not to be confused with the three patches of rock chunks on fertile ground in the north-west. To the very north-east, we can see two abandoned brick walls.

Next, there's a number of resources surrounding the landing site. They are currently being forbidden, as indicated by the red X at the bottom of each. The colonists won't interact with forbidden resources until you unforbid them.

The individual resources are:

There are also three weapons with a red X:

There are also three pieces of metal slag nearby, remnants of the escape pods your colonists came in. Eventually, you can turn them into usable steel, but for now they'll just be in the way.

A dog? As in a pet? Yes, you start with a pet! Clicking on the show animal names button in the bottom-right in fact tells us her name is Black. 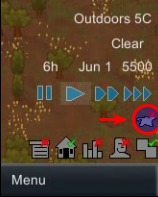 What to do first? First, double click on one resource. This will select all resources of that type on screen. Press F or click the button with the hand in the lower-left corner of the screen to unforbid the resources. Repeat that for every resource. You don't need to unforbid the weapons. 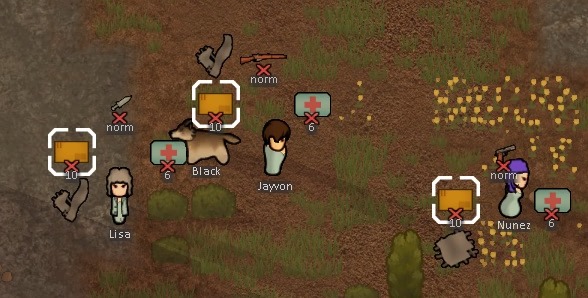 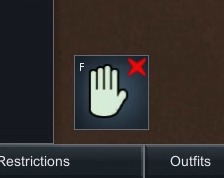 Now select a colonist and right click on a weapon and select equip. Repeat that for all colonists. Be careful to not give a ranged weapon to a colonist with the brawler trait (the context menu will warn you), and make sure your best shooter gets the rifle. The colonists will go and get the weapons once you unpause the game.

About food and shelter. The first things your colonists need are simple: some food, and a bed to sleep in. To build anything, you need the architect menu at the very bottom-right of the screen.

Go to architect, then zones, then growing zone. Place a growing zone of about 15×5 in the fertile ground near your landing site.

Assigning work. Now we have a blueprint for our new home, but we still need to make sure our colonists are assigned to work properly.

At the bottom-left of the screen, next to the architect button, is the work button. Press it. Give every colonist a check mark in growing and give one of them a check mark in constructing. Choose the colonist who has the brightest box, as that means they have the biggest skill. As constructing is further to the left than growing, is has higher priority. As long as there is something to build, two of your colonists will sow potatoes and one will build your house, after which they all will sow.

A wealth of cargo.

A kitchen and proper meals.

When starting a new game, there are many things to do to get your colony up and running as it should and doing so with efficiency, but before that can happen, your colonists actually need to be alive. Your colonists will need food and at least some degree of comfort (e.g. Someone to talk to or a game), to give them some reprieve from the constant work that the early colony will almost certainly need. To fulfil these needs there are many means, and so we begin.

Food is going to be required, no question about it. Be it raw beef or a fine meal, food will sate your colonists' need to eat, albeit at much different levels and amounts. Typically, meat and luxuries like chocolate and beer will be expensive (good luck sustaining a colony on candy), and good ole' grain cheap, both to produce and buy. Farming it will not always guarantee a good yield or adequate amount of food, but is a good mainstay of production. Here is a guide on how to start actually feeding the people you are responsible for and not just brushing away the insanity of hunger as a personal problem.

- Grains and Potatoes: These are the very simplest, basic crops that will serve to keep your colonists alive and well. They happen to be quite hardy and offer a good staple. Easy to grow, but note that some types like hotter weather (i.e. Rice) and some like colder (i.e. Corn). Very useful overall, and should be a mainstay. Do not usually decay very fast (Especially corn) so they can be stored easily.

- Fruit: Not recommended for starting out and don't bring a whole bunch to the table, but can be eaten raw without much or any penalty. Most can be harvested from the world around like agave plants or bushes, so they can be used when you need a little bit more to keep alive. Farming is temperamental but possible.

- Meat: Meat happens to be an odd case. You can easily get meat by hunting animals anywhere, and get more from larger animals, but take care that it will spoil quite fast. The quick spoilage makes this option not recommended for a staple but can supplant your main source. Refrigeration is hard to come by in a crude wood shack in the desert.

Now that your little people will not starve to death after the starting food runs out, let's get to keeping it that way sans mental breakdowns. The first thing to do is to build a small shack out of steel or wood, preferably near either a hill/mountain or geothermal vent for future expansion, and large enough to house all of your colonists. Put some beds out of any material you please (but wood is often cheaper and easier to build) and, if you feel really nice, add a plant pot or two. If you somehow fancy plopping your colonists on the north pole or a desert, you will have to deal with temperature immediately. For the colder climates, a small heater works magic when you have the electricity, but as of the moment you likely don't, so a camp fire will do. Remember that the shack should be enclosed with a door. Around 20-25 degrees C is good for comfort, but it always depends upon your colonists. If you decided to live in a fiery hell of a desert, then there is not much you can do off the bat except perhaps keeping indoors and in the cool. Once you have all this, power is helpful.