Difference between revisions of "Autopistol"

An ancient pattern blowback-operated self-loading pistol. It lacks stopping power and range, but is quick to fire.

The autopistol is a light, single-shot firearm in RimWorld which deals a moderate amount of damage per shot; a very short time between shots; moderate range and moderate overall accuracy.

Autopistols can be purchased from outlander and orbital combat suppliers, outlander settlements, or obtained from the following raider kinds:

Autopistols can also be crafted at a machining table once the blowback operation research has been completed; from 30 steel, 2 components and 5,000 ticks (1.39 mins) of work. A crafting skill of at least 4 is required.

The autopistol has a solid rate of fire for a single-shot weapon, actually having the shortest warmup/cooldown cycle out of all ranged weapons in the game. Short-distance accuracy is also somewhat respectable. With both of those characteristics combined, the autopistol is a good weapon for low-skilled shooters. Another strength that the autopistol has is that it's easy to acquire due to its very low manufacture costs and popularity amongst earlygame raiders.

This weapon could be considered the more DPS-orient counterpart of the revolver, though the difference in raw DPS is small enough that the revolver catches up with the autopistol at greater distances not only due to its slightly better accuracy dropoff, but also because it's less affected by projectile travel time owing to its overall slower rate of fire.

Although the autopistol has a somewhat average maximum range, its damage output towards and into medium distance falls behind other weapons with similar or greater ranges due to its single-shot nature and its fairly weak medium range accuracy - a similar issue that the short bow suffers from. Additionally, although the autopistol's overall damage output isn't terrible on its own, the pump shotgun and machine pistol both perform better in this aspect. The autopistol also doesn't have a high enough stopping power to stagger advancing humans or human-sized mechanoids - another advantage the revolver has over the autopistol.

The autopistol is best-suited as a close-quarters engagement weapon due to its higher short-distance accuracy, and it's also a viable hit-and-run weapon due to its very short warmup/cooldown cycle. This also makes an acceptable hunting weapon for lower-risk game due to its range and somewhat average per-shot damage, though the pump shotgun and bolt-action rifle are still better options.

Overall, the autopistol is best paired with a careful shooter up until level 17, and a trigger-happy shooter onwards.

This section goes over how well the autopistol fares against comparable weapons (similar value, tech level or similar characteristics) in 1 vs. 1 combat.

Results in the tables below are the percentages of battles that autopistols either won or tied against the weapon listed in the first column of said tables, with a sample size of 2,000 battles per result. Higher percentages are better.

The graphs assume a normal quality autopistol against an adult human that's out in the open in clear weather. For DPS, projectile speed has also been factored into the equation, with the weighting based on the base amount of attacks that it'll take to put the aforementioned target into pain shock. 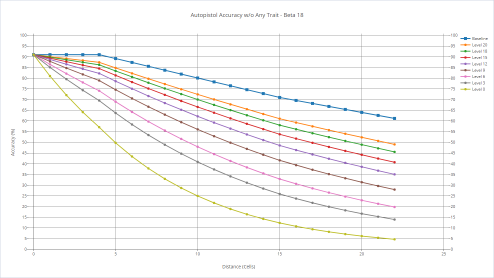 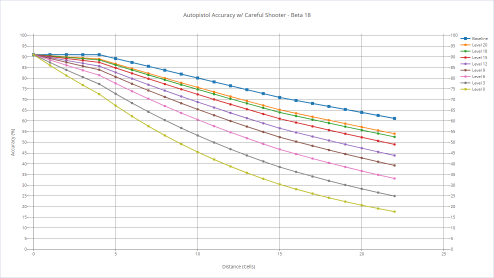 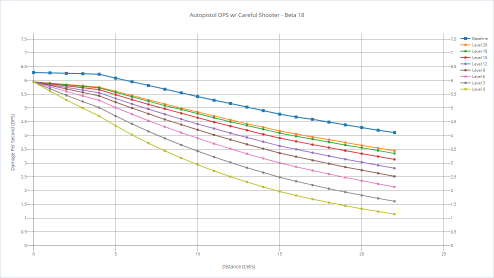 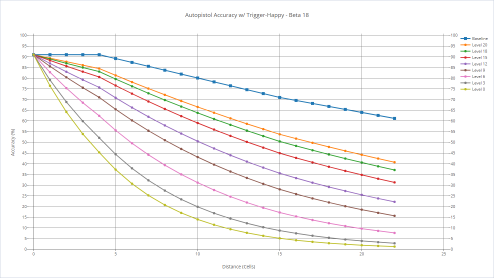 It was split from the pistol in Alpha 17. Although the autopistol uses the old pistol's sprite, the revolver is functionally closer to the old pistol.

It received a slight accuracy nerf and range buff in Beta 19.